There are no pictures of my son on the day he was born.  He came into the world at 9:30 pm on a Sunday and was whisked away to the NICU.  I saw him only briefly, clawing at the mountains of blankets that were on me because I was shivering.  This tiny form, who was blessedly, thankfully, crying - so I knew he was breathing.

I didn't see him until after midnight.  So I had no opportunity to take a picture of him on the day of his birth.  He was almost 24 hours old before I was allowed to hold him, and then only for a moment. 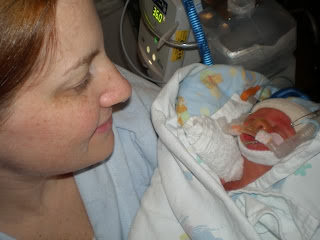 I couldn't really see his face because of the CPAP that was helping him breathe.  He had to be placed right back under the heat lamp, like someone's dinner order being kept warm until the server came to get it.  Plastic-wrapped.  Blue lights for jaundice.  Preemie diapers folded down nearly in half because they were just too big.

I didn't cry.  I went back and forth between my room and the NICU, calm, collected.  I was sent home on the second day.  There was no reason for me to stay, and I had a 14 month old at home who needed me. 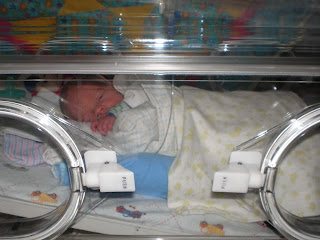 I came back for my follow up appointment.  I sat in the waiting room with all these women who had their babies with them.  I was alone.

That's when it hit me.  Four days later.  That my baby wasn't coming home for a long time, I had no idea how long.  That I couldn't hold him whenever I wanted to, couldn't try to feed him, couldn't bathe him or introduce him to his brother.  That is when I started crying and thought I would never stop.

But I did.  Stop crying.  There is really nothing so painful that we don't eventually stop crying.

They moved him from place to place in the NICU.  Finally downgraded him to the "feeding and growing" area, where things were less intense and the sound of alarms announcing "YOUR BABY ISN'T BREATHING" came rarely if at all.  I watched other babies come and go, saw their proud parents take them home after a few days, a week or two.  I waited.

I spent my days with Nolan and my nights with Aaron, my family divided.  It was seven weeks.  It felt endless. 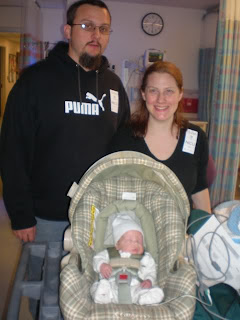 His day finally came.  We took him home and finally, he met his brother.  He got fat.  He got big.  He learned to walk and talk and no one would ever have known that he was a preemie.

He is four now.  He's the sweet, reserved, quiet child who is the image of his father.  With a little less facial hair.  His beginning doesn't matter anymore, except that now and then, on his birthday, I realize there are no pictures of his true birth day.  And I remember all of that day, every moment, crystal clear.

Now I can hug him whenever I want.  So I do. 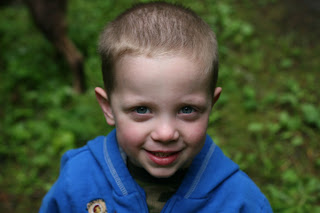