A Campground, a Purple Heart, and the Kindness of Strangers

We meet people every day by chance.  Sometimes those people, through who they are and what they have faced, can impact you in ways you couldn't have imagined.

On Friday evening, we pulled into a campsite as dark was falling at Silver Falls State Park.  We had booked at the last minute, and instead of getting the usual out of the way private site we prefer, we got a site on the inside of the loop, where your neighbours are so close you might as well be camping together.  The people next to us were an older couple camping in an RV.  They helped us back our trailer in and helped me move our picnic table while Shaun was occupied with something else.  They played light tag with a flashlight with the boys while I ran around setting up in the dark and getting some food ready.

We wound up chatting with them quite a bit, since we were so close to each other there was no avoiding each other.  They were down from Snohomish, WA, visiting their daughter who is attending law school in Salem for her birthday.  Shaun wanted to see the inside of their RV, curious as to how it was laid out.

In one window of the RV was a photograph of their son.  The other displayed a Purple Heart.  A US Marine Corps flag waved from the front.  I had seen the Purple Heart but thought perhaps the man was a veteran.  I was wrong.  They were the parents of Cpl Jeffrey Starr, a Marine killed in Iraq on Memorial Day, 2005.

After his death, a letter was found on this computer to his girlfriend.  It made him famous, and President Bush even read out a portion of it in a speech.  They told Shaun this story, and he relayed part of it to me later.

You can read the whole story here.

The loss of a son is a sadness I can't begin to imagine.  Under these circumstances, and followed by that sort of press attention - well, it's all so far beyond my comprehension.

They were wonderful people, incredibly warm and friendly, eager to help and treated our kids like they were their own grandchildren.  They clearly raised an amazing child.  My heart breaks for them that he was lost this way.

Last Memorial Day I had trouble expressing to my kids what it was all about.  I won't anymore.  I will tell them about this family.  They are now the face of the war to me.  I hope to contact them again, because as we sat under the towering Oregon trees, I couldn't find any words for their loss.  I'm still a little lost for words.  I am hoping will I will come up with some way to express to them how that chance meeting impacted me.

All I can think to do is to share this story, and hope that it impacts you, too.  And that not only he will be remembered, but the parents who loved and nurtured him and are left with a hole in their hearts and lives will be remembered too.

I'm not much of an awareness person.  I don't wear coloured ribbons and really don't believe that sharing an image on Facebook is going to cure cancer.  Or anything else for that matter.

But there are some things that can and should be passed around.  There is information out there that could prove very helpful to mothers preparing for the arrival of a new baby, or facing an unexpected diagnosis.  I wish more awareness campaigns would focus more on getting actual information out there and less on using guilt to make people hand over money.

It being Craniofacial Acceptance Month, I have decided that although I don't believe awareness will in any way help children born with clefts like my son, it might help a few parents to deal with the news and people deal with those parents.  So here is my own contribution to said awareness.

10 Things To Know About Clefts.

1. My son was born with a cleft lip and palate.  That's palate, not palette, he is not an interior designer with space issues.  It means that his lip and the roof of his mouth did not fuse properly in the womb.

2. Clefts are among the most common birth "defects" around the world, and yet almost no one seems to know it.  Approximately 1 in 700 births involve a cleft of some kind.

3. I hate the word birth defect.  My son is not defective, thank you.

4. The cause of most clefts is unknown.  I did not drink, shoot heroin, or sniff glue during my pregnancy.  While some clefts are hereditary, they often come out of nowhere as a surprise to the parents.  Most of the pregnancies were totally normal.

5. "Hare lip" is an antiquated and very offensive term for a cleft.  Please do not use it.

6. Cleft repair is an ongoing process involving multiple surgeries starting in infancy and long-term treatment by a team of specialists.  It's not something that ends once it's "fixed".

7. Children with repaired (or unrepaired) clefts may have trouble hearing or speaking.  That doesn't mean there is anything wrong with their brain function.

8. Children with cleft palates usually can not breastfeed because they can't make suction.  They need to be fed with special bottles that work on compression.   Breastfeeding such a child is a long and difficult process involving a lot of quality time spent with a pump.

9. It's ok to ask questions about the cleft.  Parents don't mind talking about it.  We know it's visible.  We'd rather you ask than pretend you didn't notice and try not to make eye contact.

10. Please don't ever tell a mother who has just been told her baby has a cleft how it "could have been worse".  We know it could have been worse.  We know there are a thousand scarier diagnoses.  We are grateful that, unless the cleft is associated with a syndrome, our child is going to live and has a future.  But imagine how you would feel being told that beautiful baby face you were dreaming of when you saw that positive pregnancy test all those months ago has a hole in it.  Yes, it could be worse, but right in that moment, it still feels awful. 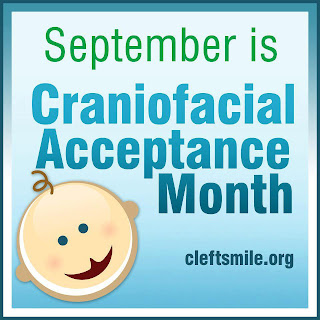 That's all.  I hope you are all feeling much more aware now.  Carry on.